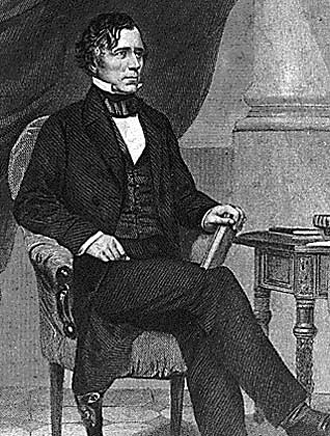 This document is an index to the terms and people included in the newspaper articles that mention President Franklin Pierce.

This index is a list of the newspapers in the Franklin Pierce Archives that contain articles about President Franklin Pierce. They are arranged with a key to the codes used in the index to identify them.

"The first attempt of General Pierce at fighting was in the preliminary movements for the battle of Contreras...General Pierce's horse fell with him and hurt his leg. That night, at 1 o'clock, the leading spirits of the American army were actively engaged in the arrangements for the battle of Contreras. General Pierce was waited upon, but he pleaded that his leg  would not permit him to take a part in that brilliant deed of arms, which was destined to cover all engaged in it with glory....The battle was over very early in the morning, lasting about 20 or 30 minutes, and the defeat was so thorough that Gen. Pierce may be pardoned for supposing that the Mexicans would not fight any more that day."

"Under this delusion, although he was too much indisposed before to command his brigade, as soon as the battle of Contreras was over, he reported himself ready for duty.  But, unfortunately for him, the Mexicans were quite as enterprising as his convalescence. The battle of Churubusco loomed up very unexpectedly to him....The batteries of the enemy looked formidable, one of 22 guns, especially, seemed to make an indelible impression on Gen. Pierce, and, instead of taking a part in the glorious action, he was taken with a fainting fit. He says: "I fell a few yards from the severest fire of the enemy."  Before fainting, he seems to have measured the range of the fire with mathematical precision."(Boston Weekly Atlas, 9/23/1852)

Newspapers in the Franklin Pierce Archives

1852- Aug. 28 - "Democratic Mass Meeting at Hillsboro - New Hampshire Taken by Storm - The Railroad Cars Groaning Under the Weight of Democracy - Not Enough Houses to Contain the Visitors, Etc."  The Weekly Argus (Albany)

1852 - Sept. 8 - "What the North American says of Franklin Pierce - a Short Review of a Modest, Candid and Discriminatory Article" Democratic Union, Harrisburg, Pa.

1853 - Mar. 23 - "Franklin Pierce has Entered Upon the Sober Realities of the Presidency of This Great Republic" Democratic Standard

1860 - July 18 - "President Pierce Without a Candidate : is Waiting for Something to Turn Up." The Evening Post, Semi-Weekly, New York

"Although the victim of unceasing abuse, poured out by political foes, perhaps not one of them would now hesitate to say that no man ever left the Presidential chair with a more stainless reputation than General Franklin Pierce." Columbia Herald, 10/14/1869 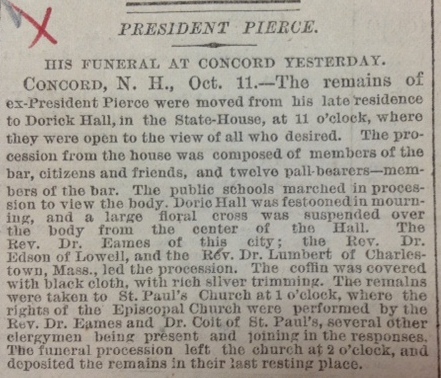 President Franklin Pierce in the Press

"Clear and beautiful as the mountain stream that leaps over crystal rocks, and playing in the sunbeams, till every spray reflects the glorious lustre of the diamond and mirrors the beauties that surround it is the character of Gen. Frank Pierce." Democratic Union, 9/1/1852

"We respectfully request all correspondents not to say anything for our columns about his fainting, falling from his horse, or anything implying disparagement of his personal character, or his military exploits. With that sort of warfare we desire to have no connexion; and we know that it is disagreeable to Gen. Scott, between whom and Gen. Pierce the utmost cordiality exists." Daily Morning Post (Pittsburg) 7/17/1852 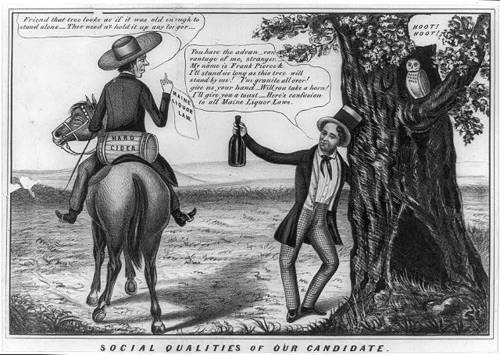 "Among the democratic politicians who gave encouragement to the Southern leaders when they were organizing rebellion in 1860 and 1861 is Frank Pierce, the poor 'pilgrim' to the mausoleum of hearts."  Burlington Times, 9/24/1863 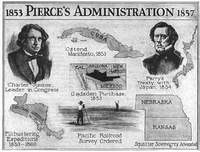