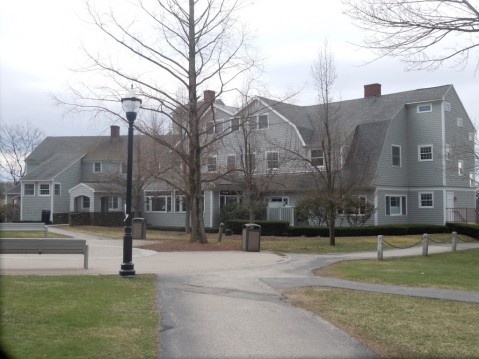 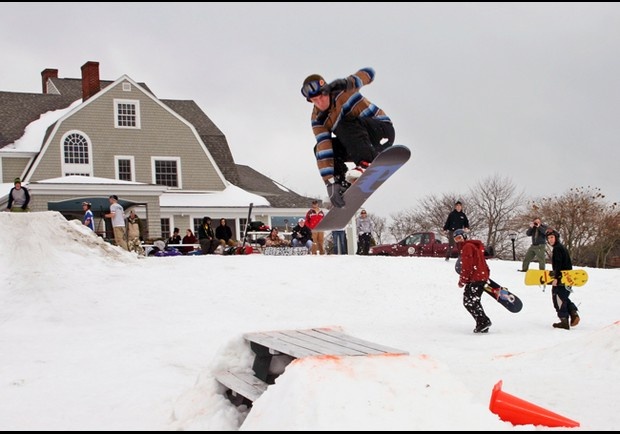 History of the Manor - Peterson Hall

The land the Manor is on was originally owned by Captain Asa Brewer, who owned several hundred acres. He owned the property from 1837-1853, and then transferred ownership to Zachariah Whitney, whose son sold the land in 1902 to an importer, George D. Emory.  According to the book Town on the Border (1989) Emory "added a grand 'Manor House' and an elegant barn-carriage house for his prize horses on the crest of the slope, above the farm house built in 1854 and owned by Zachariah Whitney."

George Emory was a wealthy importer of mahogany, who built the Manor to entertain his guests.  George Emory's home was inherited by his "playboy son" and was "used in the manner one might expect a playboy to use a house with fifteen rooms and three baths." The house was later owned by Mr. Robinson, heir to a large soap company, who sold it to a Mr. Lowe in 1924, who created an inn, frequented by some very well-known intellectuals, and created a "very exclusive rendezvous for members of the literary world" (Pierce Arrow 03/12/69).

In 1929 the estate was sold to the Boy Scouts of Fitchburg, Massachusetts, and served as a summer camp location for many years. The grassy hill in front of the Manor served as a summer tent site for many years.  It was then briefly owned by Harris E. Rice, and then, in 1946, became the home of a flamboyant actress from New York and California, Alma Monaco. Monaco was a former dancer with the George White Scandals.  The local residents were scandalized by the extravances of her parties during her years of residence.

In 1948 the property became a country inn under the ownership of Mr. & Mrs. Howard Musgrave. The inn was known as Davard's Manor.  The property then was 350 acres, and included accommodations in the Lodge, a dining-room, and several housekeeping cottages (Rindge, New Hampshire Bicentennial).

According to a 1949 article in the Jaffrey Recorder and Monadnock Breeze, Davard's charm lay "in its high elevation overlooking an unspoiled pastoral countryside and the sparkling waters of lovely Perley Lake."  Davard's offered a beach, boating, fishing, and a renovated Inn.  "Freedom of mind and body is found in the wide banquet halls with their picture windows. Its restful lounge and glowing fireside bring peace within its walls" (Box CB1-Archives).

In 1962, Frank DiPietro of Fitchburg, Mass. purchased the estate and began operating Franklin Pierce College. The Manor served as the first dormitory of the college.  Nearly all the students were housed in the Manor, with a few in the Rice Building in Rindge Center.  The dining hall was also located in the Manor, as were classrooms.

In 1964, the offices of FPC were moved from the "Playbarn" (Rindge Hall) to the Manor.  The old office rooms, on the top floor of the Playbarn, have been converted to dormitory rooms for 5 male students. The Pierce Arrow offices moved from the Manor to the Playbarn.  The Student Council Snack Bar also opened in the Playbarn (Pierce Arrow 02/10/1964).  The Manor was converted into a women's dorm and was to feature private baths and fireplaces in most of the rooms. It was also going to feature a large living room, dining room, and kitchen (Pierce Arrow 02/24/1964). Students were reminded not to drive their cars on the lawns, or to repair them in the Manor driveway, as it did not look good to prospective students (Pierce Arrow 03/25/1964).

By fall semester, 1966, the Library was due to move out of Rindge Hall and into greatly expanded space in the Manor. The Manor had been a women's dormitory, but with the construction of Edgewood, both the dorm rooms and dining hall moved on.  The second floor of the Manor housed faculty offices and a faculty lounge.   The language laboratory in Rindge Hall also moved to the Manor (Pierce Arrow 08/12/1966).

In 1969, the Manor was looking rather shoddy, and suggestions for its use included destroying it, moving it closer to Pearly Pond and using it as the President's house, or moving it near the ski slope, to be a warming hut. Students launched a "Keep the Manor" movement on campus (Pierce Arrow 03/12/69).

In his 1971 case study, DiPietro describes the manor as serving as classrooms and offices.  It is a frame construction with a gross area at the time of 9,400 square feet.

A May 1972 issue of Pierce Arrow mentions the radio station, which had undergone renovations over the academic year.  Soundproofing was installed between the studios and the Coffee House next door, and a corridor and record library were added. Two studios, a teletype room, a record library storage room, an office, and a lounge were added (Pierce Arrow 05/8/72).

In 1973, a plan was made to renovate the Manor. The art department would move out to new quarters in Monadnock, freeing up student space. Temporary walls were to be removed and the porch was to have a tv, canvas director chairs, and slat rockers. New thermopane windows would be installed. New furniture would be purchased for the coffeehouse and the former art room was to be a campus showplace with a baby grand piano, Chippendale and Tuxedo style sofas, English club chairs, new carpet, drapes, and lamps.   The area that was the print room would become a game room with a pool table, foosball game, and an electronic ping pong game. The old art department offices became a kitchen for the coffeehouse, and an information center for ticket sales (Pierce Arrow 09/09/1973).  By November, renovations had not been started, due to miscommunication and lack of work request forms. In December 1973, a list of priorities was generated. Students were informed that the Manor would not be renovated completely due to the cost.  There was also a discussion about demolishing the entire building (Pierce Arrow 12/03/1973).

In 1973, the radio station WFPR had been shut down. A transmitter was needed, as well as broadcasting licenses, and the students in charge were not organized.

In 1978, a Manor Policy Committee was formed to examine the proposed expansion of the Coffeehouse facilities in the Manor.  Proposals were to expand dining space into the Living Room, where food and beverages had been banned.  A stage was proposed for the porch.  Additional space needed for refrigeration, food storage, dishwashing, etc. was proposed for the existing Outing Club equipment room. It was proposed that the Outing Club Reading Room become a quiet reading room (Pierce Arrow 05/05/1978).  Renovations were also completed in the radio station to create a second larger studio for taping and production work.

In 1981 the Manor received repairs to the roof and a new coat of paint.

In 1985 the Manor received vinyl siding on the entire first-floor exterior, along with attractive landscaping along the front and side porches. Insulation and a new heating system were installed.

In 1989 the offices of the President, Assistant to the President,  as well as their support staff, were moved from the Library to the Manor Porch. The office of the Vice President & Treasurer was moved to the Manor from DiGregorio.  The move was designed to consolidate and centralize all administrative offices. "The paneling, fireplace, and rich mahogany wood remains. The furnishings are very traditional--wooden desks, leather chairs, and camelback furniture," commented Business Manager Rich Rettig in the Spring 1989 issue of Pierce Magazine.

In 1990, major renovations took place in the Manor. The second floor, previously Student Affairs, Housing, Counseling, and Theater offices, was renovated to include offices for the Vice President of Institutional Affairs, Public Relations, Alumni Affairs, and Development.  The third floor of the Manor was renovated to create offices for the yearbook and the Pierce Arrow (Pierce Arrow 09/06/1990). These organizations were moved into their new space by January 1991. They shared a darkroom, bathroom, and copy machine. The yearbook had layout tables and furniture. Previously, the yearbook operated out of the seminar rooms of the campus center, and layouts took place on the stairway of the manor.  The Arrow was pleased to find office space, as they had moved from a hockey supply room in New Hampshire basement, to the Mountainview basement (Pierce Arrow 02/07/1991).

In an October 28, 1997 Pierce Arrow article, Prof. Bill Jack discussed paranormal sightings in the Manor. Professor Jack's class spent the night in the Manor during a full moon to investigate claims that the Manor was haunted by the ghost of a woman who had been murdered there many years ago.  During the night, Prof. Jack reported seeing a disembodied head float by as he sat, alone, on the third floor. A student saw a shadow on a landing, preceded by two flashes of light.  Many other students said the third floor felt "strange."  Wind chimes were put in place to test other-worldly gusts of wind and were heard ringing throughout the night.

The Manor received a new roof in 2000, and the Alumni Lounge was refurbished to create a more inviting setting. The renovations included working fireplaces, new furniture, and data ports. In 2001, the alumni lounge was painted, the floor sanded and polished, and new lighting was installed. The furniture was replaced with comfortable chairs.

In 2002 improved lighting was installed around the courtyard of the Manor. Structural failure of the building, due to heavy snows the winter before, meant that the roof and exterior walls needed to be removed and rebuilt. Subsequent exploration of the structure revealed that the foundation had also failed, calling for a new foundation. Heavy snow in the winter of 2002-2003 caused the front porch of the Manor to detach from the building. A new addition to the front of the Manor expanded community rooms (Pierce Arrow 10/08/2003).

Stories of the ghostly past of the Manor were revived in the October 22, 2003 Pierce Arrow issue. While stories have been embellished, Professor Bill Jack reported on controlled experiments. He reported that he had spent about 20 nights in the Manor and was able to produce cold spots where a spirit was believed to be present, and also mentioned the ringing of a heavy wind chime.

The Manor was renamed Peterson Hall in 2004 to honor President Walter and Dorothy Peterson. A dedication ceremony was held Oct. 21, 2004.

In 2006, the Campus Center was renovated, and the Thoreau Gallery was removed. It was temporarily relocated in Peterson Hall, in what had been the Faculty Lounge (Pierce Arrow 10/04/2006).

In March 2011, a desk formerly owned by President Franklin Pierce was donated to the University by former student, Paul Rotondo. It was placed in the President's office.  The desk was built in 1830 for Pierce, an attorney in Concord at the time (Pierce Arrow 03/03/2011).

In summer 2013, the Board of Trustees agreed with a number of alumni that Peterson Hall should be known as Peterson Manor.