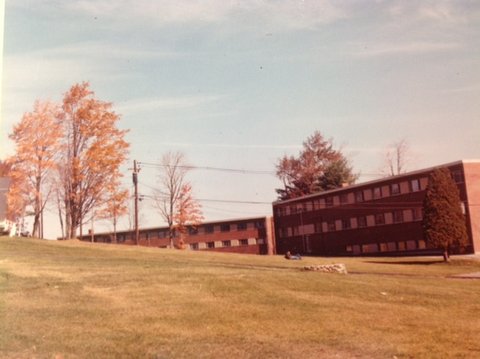 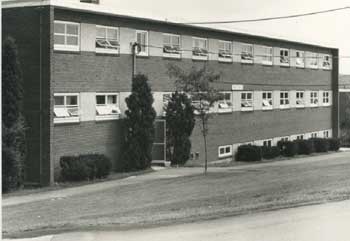 Monadnock Hall was constructed in 1965 to serve as a residence hall and as classroom space. It was constructed of masonry and steel with a gross residential area of 14,000 square feet and a gross classroom area of 7,000 square feet. It was the second dormitory built on campus. As with Crestview, the dormitory was built first and paid for after students had been recruited to fill it and pay room fees.

Two years later, Monadnock was suffering from a great deal of dorm damage, perhaps increased because of overcrowding.  Ceiling tiles and walls were smashed in, fire alarms were torn from the wall, laundry machines were broken into and the money was stolen, glass doors were broken, and telephones also were broken off the wall.

In the summer of 1975, the decision was made to renovate Monadnock. It would not be occupied by students, but serve as a guest house for visiting alums, sports teams, and others. In February 1976 the renovation was near completion, and plans were to offer Monadnock as a quiet dorm.  The renovation consisted of replacing windows, lighting, ceiling tiles, new carpet and mattresses, and painting. "Certain wall paintings, which were considered to have artistic merit, were left alone. However, incoming students will be given the option of painting them over if they wish." (Pierce Arrow 02/18/1976)

In 1990, the bathrooms were totally renovated, with private showers and changing areas added. The roof was replaced. (Pierce Arrow 09/06/1990)

In an October 28, 1997 Pierce Arrow article, Prof. Bill Jack discussed the rumors of paranormal sightings in Monadnock Hall over the (32) years. One of the middle rooms on the second floor, overlooking the parking lot, was said to be haunted by a ghost. This man's figure has also been spotted walking back and forth outside this second-floor window.

In 2000 Monadnock got new flooring and was reconditioned. It was also wired to the internet during the summer.

In 2002 the parking lot and roadway around Monadnock were repaved, widened, and granite curbing was installed. The original built-in furniture was removed and replaced with new college standard furniture.

In 2018, Monadnock Hall was renovated and repurposed from a dormitory to the College of Business (Pierce Magazine, Vol. 36, No. 2)