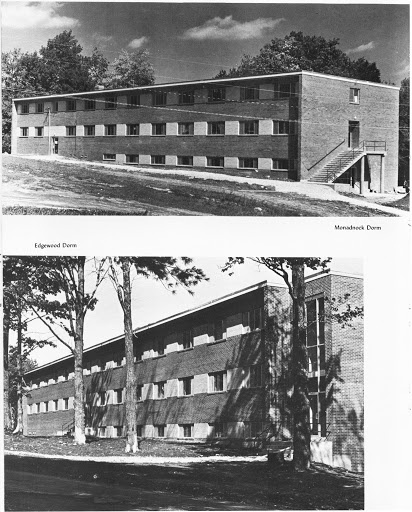 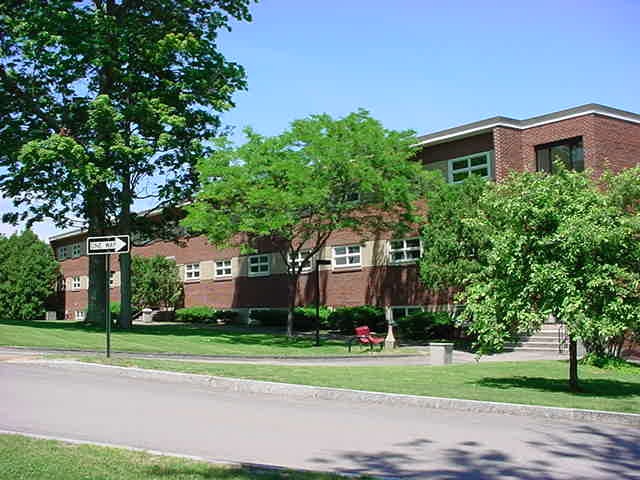 Edgewood Dormitory was constructed in 1966 to serve as both a women's dormitory and dining hall. It was made of masonry and steel construction, with a residential area of 16,540 square feet and a dining and services area of 8,270 square feet.

In 1966 a new dormitory was constructed created to relieve overcrowding in student housing and to bring more women to campus (Pierce Arrow 03/11/1966). It was to house 210 students and was originally designed as a cross-shaped, five-story building. The top four floors were to contain living space, with all services to be placed around a central core. There were to be single, double, and triple rooms, and each floor would have a lounge. The use of the bottom floor was undecided in early 1966, but ideas were: a cafeteria, auditorium, lounge, gym, or study area.

By August of 1966, construction of the dorm was well underway, as a three-story building that would house 136 students. The ground floor was slated for a cafeteria. The new dining hall seated 300-400 people at a time and the kitchen included the most modern equipment possible. The dining hall had a tile floor and walnut imperial Formica tabletops.  The fiberglass shell chairs were attractively tinted in yellow, charcoal, orange, and green. The dorm had 46 rooms housing 136 students. It had wall-to-wall carpeting. All furniture, except beds and chairs, was built in, including individual study alcoves. Each floor had a lounge and living quarters for the housemothers on each floor (Pierce Arrow 08/12/1966).

The new dining hall was opened on October 13, 1966. It offered coke and milk machines, two serving lines, a new dishwasher, including conveyor belt, and seating for over 400. The first dinner was a roast leg of lamb, pan brown gravy, whipped potatoes, buttered peas, and mint jelly (Pierce Arrow 10/17/1966). Students moved into Edgewood in early November. The dorm was intended for women, but much to their shock, four men were moved into the dorm.

In 1981, the college had a surplus of freshmen, and Edgewood had 34 rooms converted to triples. The rooms would revert back to doubles as students failed to show up.

In 1986, the ground floor was converted into suites for 20 students and a resident director. A new laundry area was added, which utilized the improved hot water system made available to all campus laundry facilities.

In 1987, the campus fitness center was constructed in the basement of Edgewood, filling in the space that had been a cafeteria. It featured a large room containing free weights, Nautilus, exercise bicycles, an aerobic area, and other fitness equipment.

The fall of 1990 found housing stretched to its limits. Some freshmen were housed in Edgewood lounges, before finding rooms in dorms.

In October 1992, the Rindge Fire department assisted the FPC fire department in extinguishing a hot pot fire in the male hall of Edgewood. A negligent student had left his hot pot on while attending a residential life meeting (Pierce Arrow 10/22/1992).

By November 1992, the "Edgewood Watch" program had been created to help clean up and put an end to the repeated destruction and vandalism in the building. Residents had engaged in "barbaric" behavior, trashing hallways and bathrooms, and strewing empty beer cans. Conditions improved dramatically, much to the relief of the custodians and residents (Pierce Arrow 11/19/1992).

In 2000, Edgewood was fully wired to the internet during the summer.

In 2001 granite curbing and an improved parking lot were created. In 2002, successful retention efforts and student recruitment meant more housing was needed. Edgewood doubles were converted to triples.

Housing options for 2005-2006 included an opportunity to receive a discount for certain room choices. There were ten triples in Edgewood that qualified for this discount (Pierce Arrow 04/13/2005).