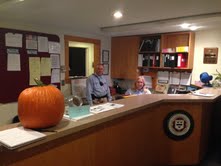 In 1990, the Security Dept., formerly located in the White House, was moved to St. Peters house on College Road (later University Dr.). The house was purchased from Blanche St. Peter, a friend of the college, and realtor, who also originally lived in the White House. The house was renovated to serve as Security headquarters and a new Telecommunications Center (Pierce Arrow 09/06/1990).

In 2000, a new vestibule and entranceway were constructed at St. Peters. A new roof was also installed.