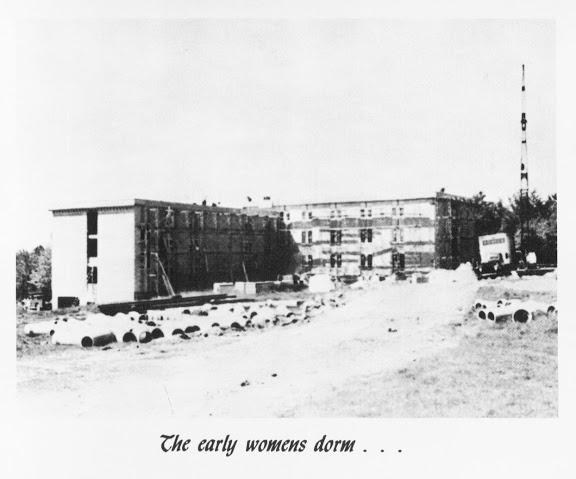 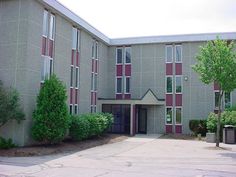 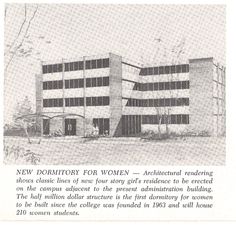 Granite Hall was constructed as a dormitory in 1967. It is made of reinforced concrete and masonry and the gross floor area was 36,000 square feet. It was eagerly awaited as a women's dorm and was expected to ease overcrowding. The basement was intended to have a maintenance room, a large study room, a rec room, a music room with two practice rooms, vending machines, a ski storage room, a laundry, a trunk storage room, and an incinerator. One phone per floor was to be added, much to the delight of the students, who had been suffering from having only one phone per 70 students. Each floor was to have 63 women, with 21 women per wing (Pierce Arrow 09/29/1967).

In 1969, Granite was the site of messy bathrooms, loud record players, people screaming out windows, messed up lounges, and people who answered the phone but never passed on a message (Pierce Arrow 10/24/1969). Later that winter, residents complained that the tea for the administration and student leaders had not yet happened, and a proposal to allow men in the dorm had not been seen either.

In the fall of 1977, Granite became coed when men moved in. The Fire Fighting brigade was also active at that time and practiced on Granite.

In 1985, all ceilings were remodeled and new lighting fixtures were installed.

In 1990, the basement of the Granite dorm was renovated to contain various student-oriented functions, formerly located on the second and third floors of the Manor. The basement of Granite houses the Health Center and the Counseling Center (Pierce Arrow 09/06/1990). Opened in November 1990, the new area included three examination rooms, a new lab, a staff/EMT lounge, a head nurse's office, and a shared conference room. Health center staff looked forward to the new space, as they had been located in temporary trailers during renovations.  The counseling center moved from the second floor of the manor and contained offices and a testing room. Outside, the space between New Hampshire and Granite dorms was made into a small walkway area with a new staircase and additional parking (Pierce Arrow 11/01/1990).

In 2001 bathrooms at Granite were renovated, including ceramic tile, toilet, and shower fixtures, ceilings, lighting, and ventilation. In December of that year, a steam pipe burst, damaging the Health Center. Water and steam damaged the floor, ceiling, and walls. The center was moved to trailers in front of Granite. The Counseling Center was also somewhat damaged, and counselors were moved to temporary spaces in Student Affairs, the Library, and other parts of campus. They were able to move back into their space in February 2002 (Pierce Arrow 02/13/2002).

In 2002 the windows in the stairwells were replaced with new energy-efficient insulated glass windows. In November, residents were evacuated and seven people were diagnosed with carbon monoxide poisoning. All residents were moved to the fieldhouse for observation and treatment. The carbon monoxide was caused by the college fire truck, which had pulled up outside the building and was idling. Fumes gathered in the fire truck garage and quickly spread through the building. Carbon monoxide detectors were purchased to prevent future problems (Pierce Arrow 11/06/2002).

In the spring of 2009, plans were made to create sophomore suites in Granite. The suites were to be located in the east and west wings. Double rooms were converted to singles, a triple would become a double, and the other triple would become a student lounge. The lounge would contain a small dining table, chairs, furniture, and possibly a fridge and microwave (Pierce Arrow 04/22/2010).

In 2014, Granite hall was designated as a Wellness Living option.