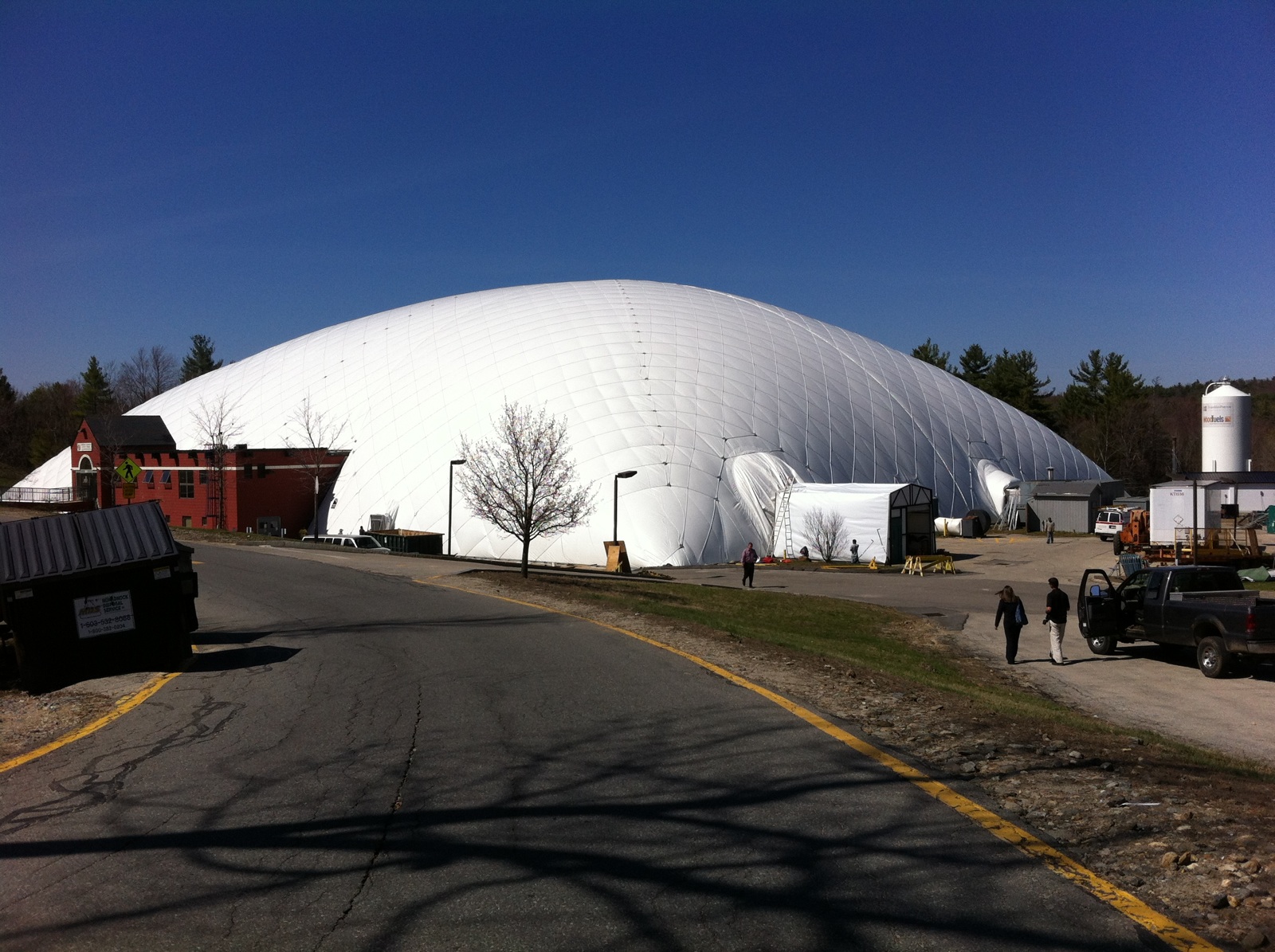 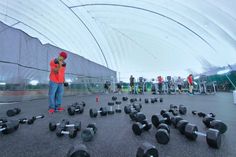 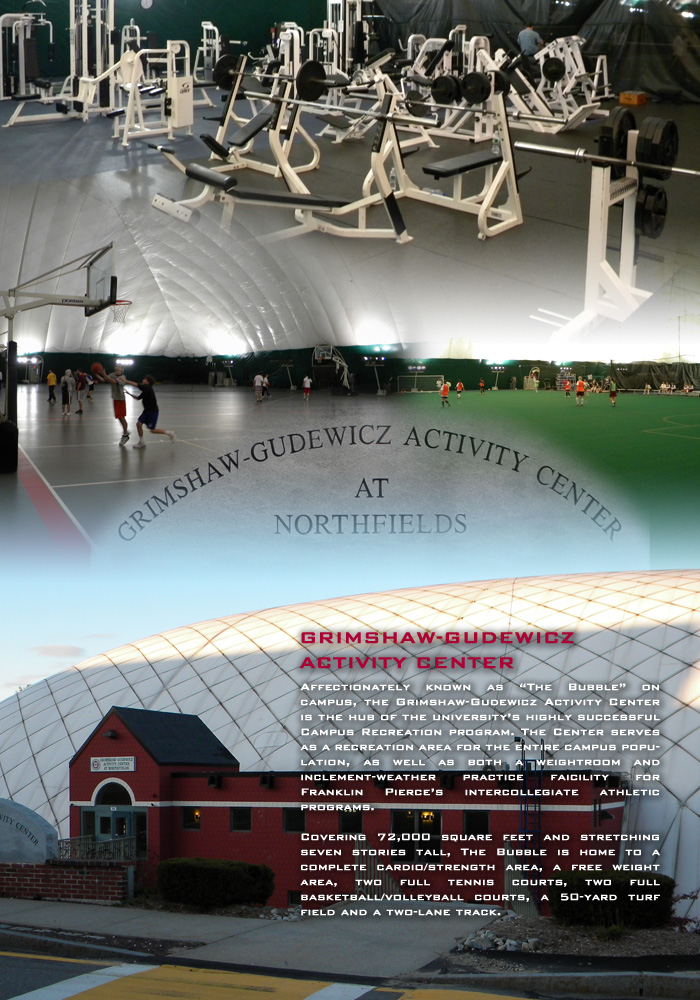 History of the Bubble

The Bubble was erected in the winter of 1995 when a community "barn raising" was held. Students, faculty, and staff, armed with plastic shovels and brooms, removed a great deal of snow from the fabric, which had been prepared for inflation, then caught by a heavy snowstorm.  Never before had so many individuals at Franklin Pierce rallied to assist in the construction of a campus facility. In fact, many were wearing inappropriate footwear and had no mittens, as all were abruptly ordered from their jobs to assist. In two hours the airframe was free of snow and it was raised on December 15, 1995. The Bubble was formally dedicated on Founders Day, November 13, 1997. It was built with a $400,000 gift from the Grimshaw-Gudewicz Charitable Trust.

The 1995 Bubble was constructed by Tensar Structures, Inc. of Akron, NY. It was a 72,000 square foot, seven-story high airframe structure. It housed a cardio and strength area, two tennis courts, two full basketball courts, an all-purpose area, a double lane track, and a 50-yard turf field. There is a clubhouse on the second floor of the brick building in front of the Bubble (Pierce Arrow 09/21/1995).

On September 26, 1998, the bubble deflated after being punctured by vandals. Three individuals sliced a 10-foot gash in the backside of the Bubble. Soon, over 100 student volunteers assisted in lowering the airframe to prevent more damage. A day later, Tensar, the Bubble creators, were on campus, making repairs. It was fully operational again by Monday at 6 pm. Luckily the damage was minimal (Pierce Arrow 10/15/1998).

On February 5, 2001, the Bubble deflated under particularly heavy snow. A 22" snowfall loaded the structure with such a heavy load of snow and ice that a support cable snapped. Many students were in the bubble, playing floor hockey or working out when the cable snapped. All were evacuated safely. The fabric covering was not reusable, and plans were made for a new bubble (Pierce Arrow 02/09/2001). Two weeks later, the college had a contract with ASATI Corporation for an airframe structure that was much more resistant to the forces of nature. "It will be nice knowing this will never happen again," said one avid bubble user. The new structure was planned to be installed during spring break (Pierce Arrow 02/21/2001).

By April 12, 2001, a new bubble had been erected. Although damage to the volleyball and basketball floors prevented their use until summer, the majority of the facility was open to students. A new netting system was created for the tennis courts. Unlike the first bubble, with its eight seams, the new bubble had only three connecting points. There was also a new harness system to prevent the Bubble from "ever collapsing again"   (Pierce Arrow 04/13/2001).

In 2006, vandalism to the rear of the structure led to a security firm being hired to protect the fabric. Another danger was people climbing the outside of the bubble. Large lights were installed as well, leading to unexpected illumination of some neighboring dorm rooms (Pierce Arrow 04/28/2006).

During the winter, air pressure is increased to make the surface firmer and withstand the weight of snow and the actions of the wind. The heat is also turned up to help melt snow and ice. In 2009 wood pellet boilers were installed at the Bubble to cut the CO2 emissions and save on heating costs. The wood pellet boiler was slightly larger than the one installed at Granite Hall and would replace the propane system (Pierce Arrow 10/01/2009).

In 2011, FPU proposed sharing the use of the Bubble with Conant High School track team in exchange for utilizing their outdoor field for the new Track team.

In November 2011, two incidents of vandalism occurred at the Bubble. The exterior fabric was slashed, leading to some deflation. The same evening, an EMS squad car caught fire below Granite Hall. The five slashes were between 3'-4' long. It took five hours to stitch them back together. The other incident was a rock through a window (Pierce Arrow 12/08/2011).

On February 9, 2013, the second bubble collapsed under the weight of several feet of snow and high winds. Equipment punctured the fabric and destroyed the bubble framework. With the damage to the fabric, a new bubble had to be fabricated to fit the site. A temporary small tent was set up to serve as a weight room while a new bubble was being manufactured (Pierce Arrow 02/14/2013; Pierce Arrow 03/14/2013).

On May 1, 2013, a new Bubble was installed and inflated, much to the relief of the campus community. However, the bubble was not ready for use until the fall semester. On October 4th, in the late afternoon, the Bubble was officially opened and a reception was held in the clubhouse. The women's volleyball and lacrosse teams immediately began practice, the CrossFit class surged into action, and many happy students filled the new machinery.