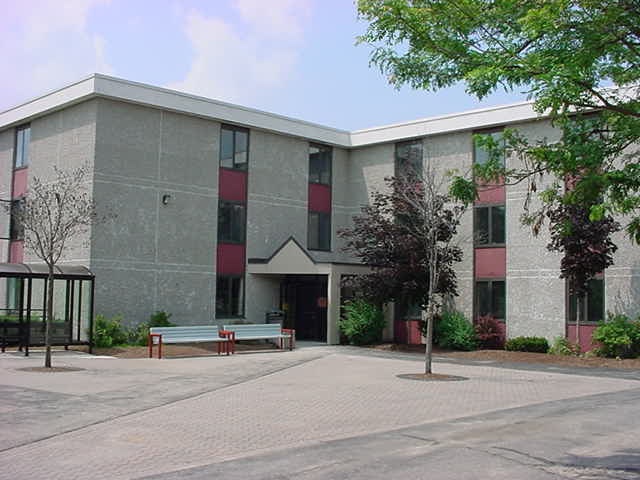 New Hampshire Hall was constructed in 1969 to serve as a men's dormitory. It was a 400-bed dorm. It was designed by Whitman & Howard and built by Macmillin of Keene, at a cost of $1,250,000. It is 4 stories high, with a New Hampshire granite chip exterior. It had 8 wings, served by twin reception and recreation lounges (Pierce Arrow 09/01/1969).

The Pierce Arrow offices were located in a closet in the basement of New Hampshire hall, previously the supply room for the hockey team. In about 1989, the offices moved to another part of the basement, then relocated to Mountainview basement (Pierce Arrow 02/07/1991).

In 1990 the basement of  New Hampshire dorm was renovated to house offices for the Vice President of Student Affairs, the two Assistant Deans of Students, Housing, and Resident Directors. The Transportation office was housed there, with college vans and buses parked outside. The basement also housed the Northern New England Review office (Pierce Arrow 09/06/1990). The new student services offices were opened in early November. Also in the area were a lounge, a computer/copy room, and the office of the coordinator of residential life, as well as an office for the four resident directors (Pierce Arrow 11/01/1990).

In 1994, renovations were made in New Hampshire, making dorms wheelchair accessible and including two handicapped bathrooms near the entranceway. A new roof was constructed over the crossover section between Mount Washington and New Hampshire dorms (Pierce Arrow 09/21/1994).

In summer 2008, bathrooms in the east hallways were renovated with new lighting, fixtures, tile, and ventilation (Pierce Arrow 08/30/2008).

In summer, 2011, a new Career Planning and Placement Center was created inside New Hampshire Hall, with a separate entrance, several offices, a career library, an interview room, and a presentation area (Pierce Arrow 05/05/2011). The Lloyd and Helen Ament Astmann '69 Career Center was officially opened on September 23, 2011 (Pierce Arrow 10/13/2011).