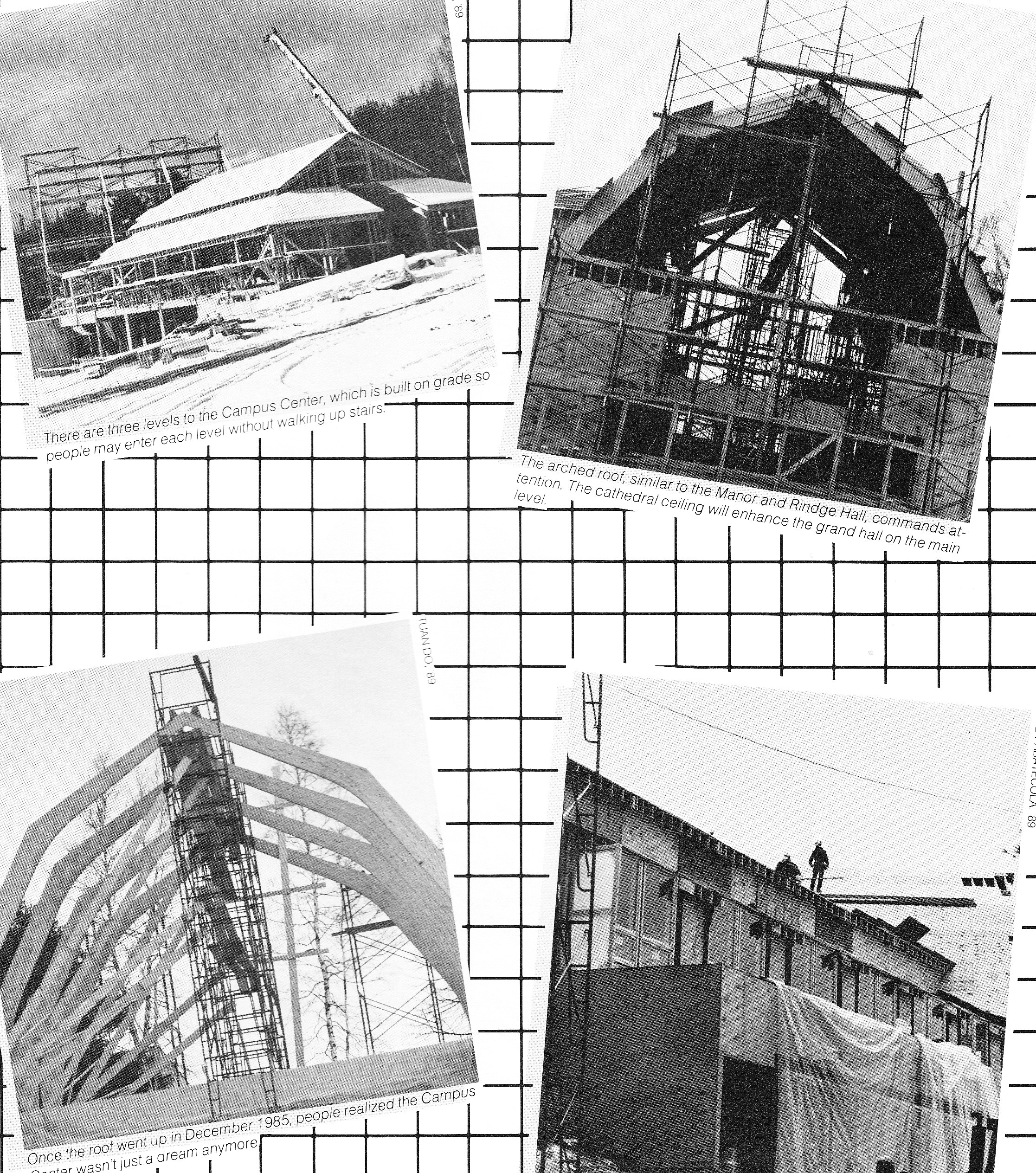 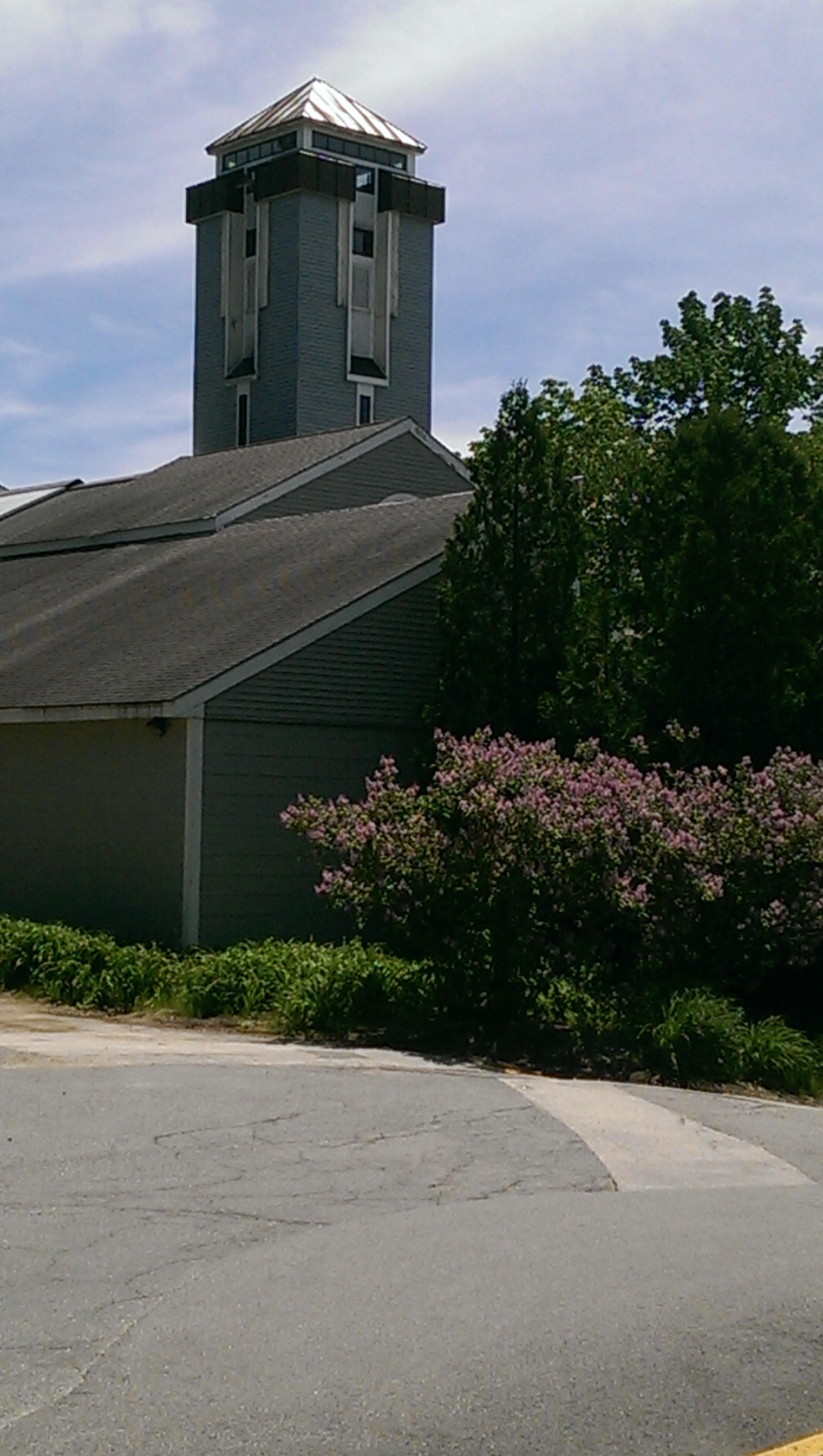 History of the Campus Center

In October 1983, plans for a new campus center were unveiled. It was originally proposed as a $2.1 million project, and a feasibility study was commissioned with a Boston company. Schematics of the plans can be found in the October 1983 issue of Pierce Arrow.

The Emily Flint Campus Center was completed in 1986. It contains a bookstore, post office, dining hall, pub, and offices. The center was originally 29,000 square feet. Construction was begun in May 1985 and it was occupied in August 1987. On May 8, ground was broken for the campus center/dining commons, a $2.5 million project. The Campus Center was the first new building since Marcucella Hall in 1971. The Center was to be heated by solar power and hot air and was to have dining facilities for 500 people.

The focal point of the campus center was the Grand Hall, a dramatic centerpiece two stories tall with a cathedral ceiling and fireplace. The Hampshire room was the most formal room, with a cathedral ceiling, special lighting, and a fireplace. The Pierce Room had oak flooring, a fireplace, and tasteful furnishings. A special feature of the Grand Hall was the Grand Hall Bridge to provide access between the bookstore and the Monadnock Room on the upper level. Also unique was the Tower, with the beloved carillon chimes that ring out over campus (Pierce Magazine, March 1985).

In 1988 the Campus Center was named after the first female chair of the Board of Trustees, Emily Flint.

In 1992 a new snack bar (greenhouse) and student lounge area was completed. The snack bar, called the Greenhouse, opened in January 1993.  It was constructed as a solarium and provided a place for students to sit and enjoy beverages. In February, a cigarette dropped in a wastebasket started a fire in the ATM booth (Pierce Arrow 02/10/1992).

In 1993, an addition was built on to the cafeteria, adding an office area, storage area, loading dock, and washroom. Seiler's Food Service was able to convert the old storage room into a freezer. Seiler's enthusiastically predicted adding a wok bar as well (Pierce Arrow 09/09/1993).

In 1997 the Hampshire Room, Grand Hall, and the Raven's Nest were upgraded and painted.

In 1998 the Campus Center was renovated, and a glass foyer was added on the top level. A bond issue raised funds to repair structural problems, poor drainage, and a small food prep area.

In 1999 the Follett company began managing the bookstore and renovated the bookstore space. They also constructed bookstores at all the College of Graduate and Professional Studies (CGPS) campuses.

In 1999 the Thoreau Gallery was renovated.

In 2000, the Greenhouse cafe was closed, with food options being moved to the Bookstore. Plans for the greenhouse space included a lounge (Pierce Arrow 10/11/2000).

In 2001 windows and sliding glass doors were replaced.

In 2002 the boiler plant and storage tanks for the hot water were replaced with more efficient and larger capacity equipment.

In 2006, major renovations were undertaken on the Campus Center, to create a large auditorium. A ceiling was added to what was the Grand Hall, creating two separate floors. The bridge that was suspended over the cafeteria was removed.  The outside patio was enclosed and climate-controlled. The new auditorium was named Pierce Hall. Renovations began in May, after graduation, and were due to be completed in by the next spring. The Thoreau Gallery was removed from the Campus Center and was temporarily moved to Peterson Hall (Pierce Arrow 09/02/2006).

In September 2010, Phase I of the dining hall renovations were completed. This renovation included new booths with hanging lights, a fresh-to-order station, and new furniture. The kitchen was renovated with new floors, ceiling, and lighting. New grab-and-go options were to be offered, as well as a smaller salad bar and more environmentally friendly portions (Pierce Arrow 08/28/2010).

In 2011 Phase II of the dining hall renovations added a new quarry tile floor and a new glass entrance. Three new serving stations were created, including a grill station, a pizza station, and a carving station. Colorful paint was added as well.