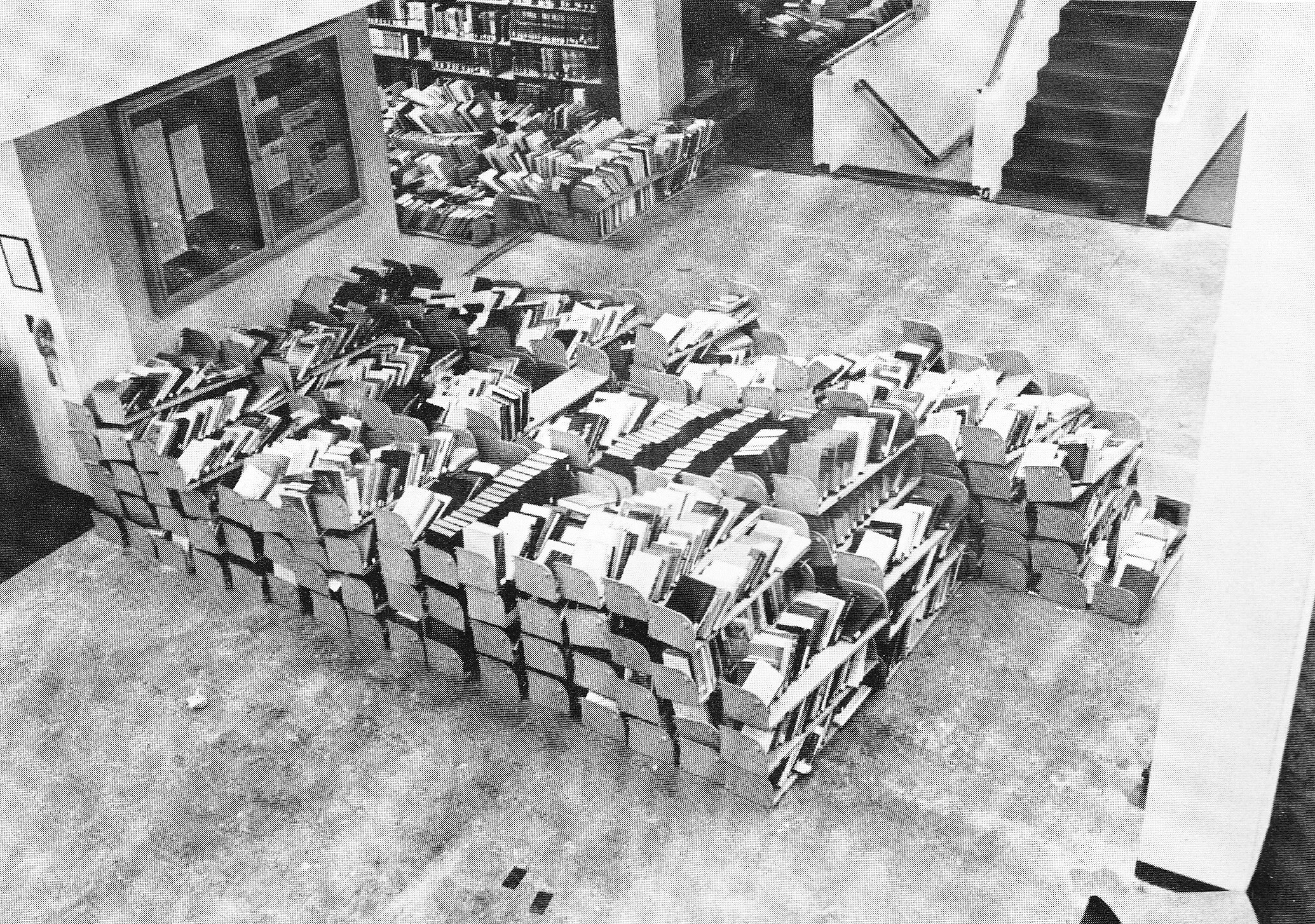 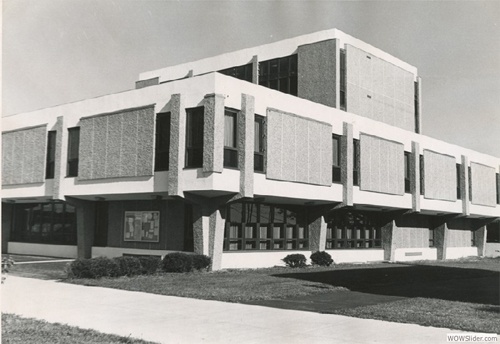 In 1964, a library was "fixed up" in the Playbarn (Rindge Hall). The library was stocked from three sources: other colleges' discards, individual donations, and purchases (Pierce Arrow 02/24/1964). In 1965, the library had 3,356 volumes. These included "many books that were useful and important," such as The Story of Russia, and Invertebrates by Henrietta Hyman Libbie (Pierce Arrow 04/08/1965).

By fall of 1965, the collection had grown to 12,500 books. Between 1963 and 1968, holdings grew to 20,134 volumes. Records, microfilm, and periodicals were also included. In a 1965 Pierce Arrow Library Notice, the then-library director requested that students not use the library as a social center, bring in food or drink, or smoke in the stackroom.  He also requested a proper dress and good grooming for all library users (Pierce Arrow 11/01/1965). The "new" library in the Manor was appreciated by the students. The floors did not squeak, voices didn't rebound off the walls, it had an interesting arrangement of shelves, and the many windows provided light and views of the Pearly Lake and Mt. Monadnock. One student did note that the buzzing of the fluorescent lights was very disturbing (Pierce Arrow 10/31/1966). 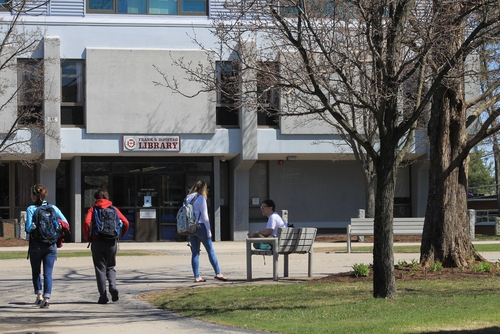 In 1966, plans were made for a new library.  On September 9, 1967, ground was broken for the construction of the Library Resource Center.  The Library building originally served as the library, audio-visual center, language laboratory, and had faculty offices in the 3-story tower.  It was made of reinforced concrete and masonry.  The gross library area was 37,000 square feet and gross offices were 6,100 square feet. The highlight of the groundbreaking was the installation of a time capsule, which included microfilm, magnetic tape, phonograph records, television components, slide film, and scientific journals, as well as a videotape recording of the ceremony (Pierce Arrow 09/29/1967).

Frank DiPietro designed the library to meet the needs of students living and studying in the "fierce" New Hampshire winters. With faculty offices and the library in one building, students would only have to leave to go to class. The main portion of the building was the library; the basement housed a media center; a three-story tower, nicknamed the "Power Tower," housed the Humanities, Social Studies (including economics and business), and Sciences.

In 1968, the librarian put out a call for donations. Any and all books were welcome to be dropped off. In October 1968, a fundraising dinner, "the Harry Hershfield 83rd Birthday Convocation" took place in the Hilton Hotel ballroom, New York City.

In 1970, the Pierce Arrow noted that the library contained 23,000 volumes, and if each student took out 23 books, the library would be empty.  The writer went on to discuss the lack of security in the building, its many exits, the poor visibility of the circulation desk, the heavy traffic flow, theft of periodicals, and the administrative offices taking up too much space (Pierce Arrow 10/30/1970). During November of that year, students counted the books in the library, estimating how many had been lost. They also demonstrated the ease with which books could be stolen (Pierce Arrow 11/13/1970). In December 1970, a concert was held in the library, irritating students who were studying for finals.

In October 1972, the Pierce Arrow reported that the library had been forced to renovate the entryway and implement checks by staff on all books leaving the library. This was due to a large number of books missing from the collection. The mutilation of books was also a problem.  The newspaper also described the Special Collections of the library as "a collection of sex-oriented books, drug literature, and the collection of distinguished theses" (Pierce Arrow 10/02/1972).

In 1977, the library was criticized for the high noise level, the rumored stacks of unprocessed books in the basement, and the running of the library itself.  Students felt there were too many things going on in one building and that too many activities contributed to the noise level (Pierce Arrow 12/09/1977).

In 1978, the mass media center, located in the library basement, expanded. Production of color slides, audiotapes, photographs, and graphic materials could be handled (Pierce Arrow 10/09/1978).

In 1978, the Computer Center received 16 terminals, two printers, and a computer. Until then, the lab had offered two terminals, one printer, three disc drives, and a single computer (Pierce Arrow 12/12/1978).

In 1982 the Computer Center was expanded and relocated from the Library Resource Center to Marcucella Hall (Pierce Arrow 09/10/1982). New rust-brown carpeting was installed in 1981 to "improve the library appearance" (Franklin Pierce Magazine, Vol. 6, No. 1).

In 1983, a radio communications center was built on the ground floor of the Library building. It included two "well-equipped" radio production units, along with an adjacent classroom (Franklin Pierce Magazine, Vol. 7, No. 3).

In 1986, the library received new draperies, new front doors, and a fresh coat of paint.  A 2-inch thick layer of insulation was applied externally to make the building watertight and reduce heating costs. In the summer of 1986, a cable television system was installed and a 50-foot antenna mast and four satellite dishes were placed on the library roof (Pierce Arrow Summer 1986).

In 1988, a computer lab was installed in the basement of the library.

In 1998, the computer lab in the basement was renovated.

In 2001 renovations were made to the building with the creation of the Marlin Fitzwater Center on the third floor. An instruction or Information Literacy room was created on the main floor, and designed to hold tables and computers for 24 students. The lower level was renovated to include periodicals shelving, storage, a kitchenette/lounge, and an Archives room. 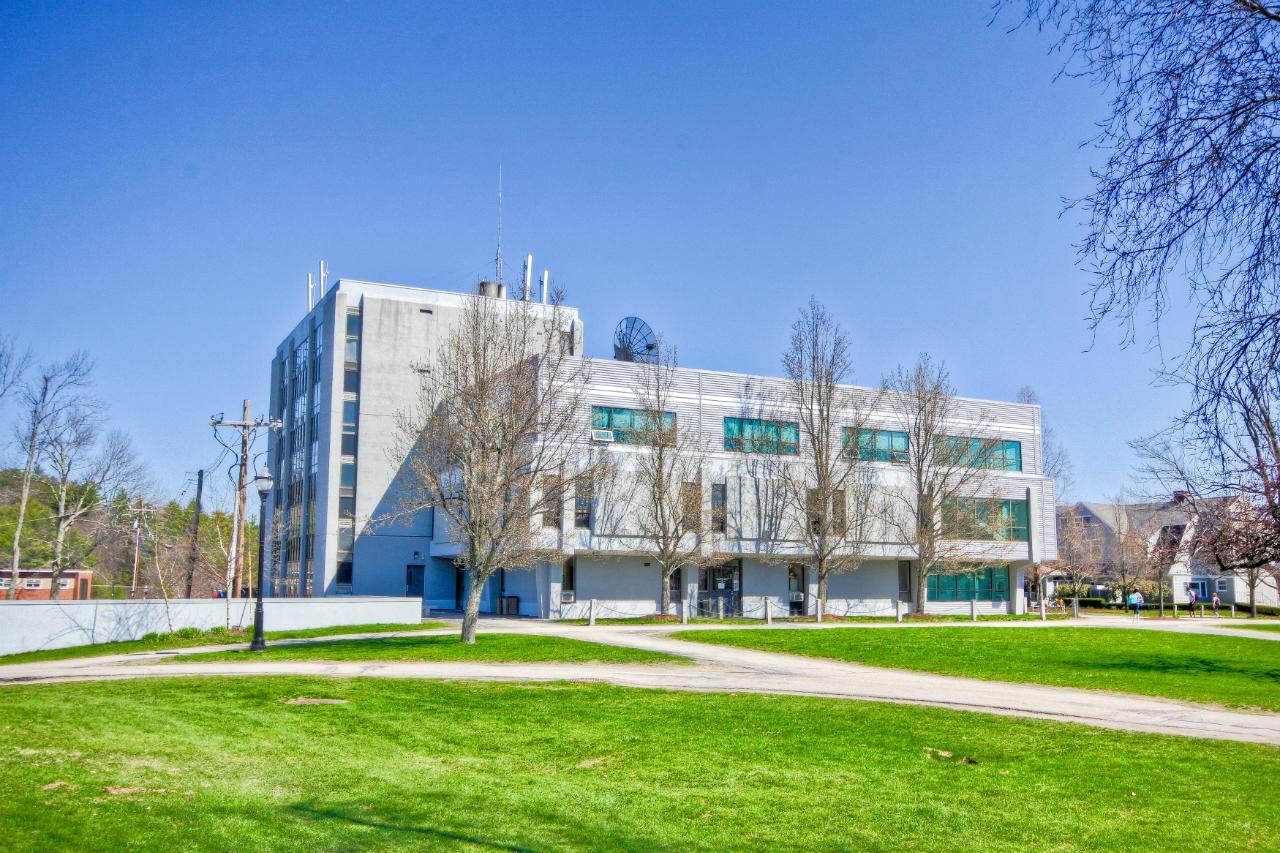 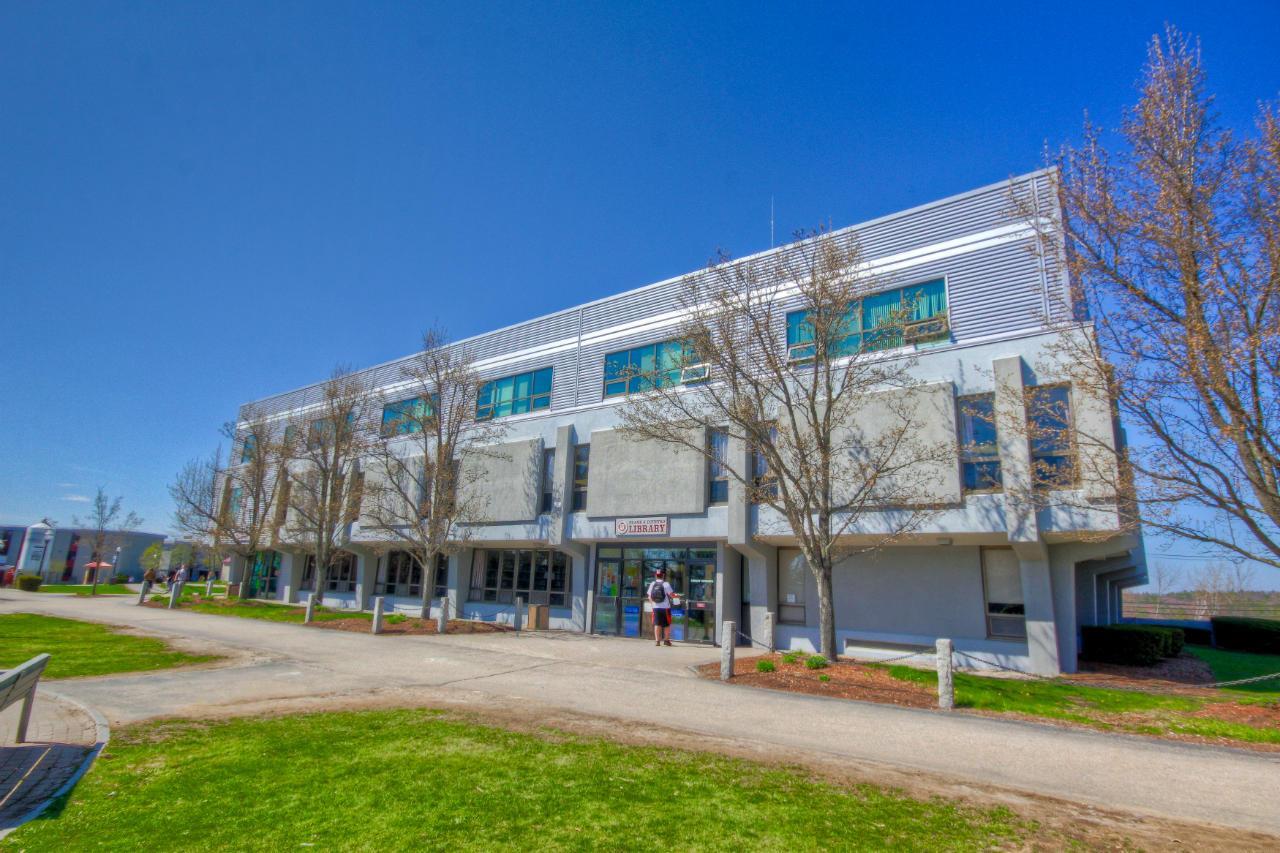 In Spring 2018, the Library Cafe was created in the former Academic Services/Center for Academic Excellence space on the first floor.

During the Summer of 2018, the Cafe was renovated and an outdoor patio was created.